Thank you for accepting our request for a dialogue with you on the issues regarding our concerns of the highly critical situation of our global climate crisis. We recognize this as an issue that undeniably requires urgent action globally, as well as locally, here in Chiang Mai.
Firstly, we would like to express our grave concerns about the slow process of negotiations between nations- as well as the insufficient commitment made by all nations in addressing the causes and consequences of climate change. It has been recognized that major industrialized countries, such as the US, Japan and the UK, have a significantly enhanced responsibility for the depletion of global natural resources and the emissions of GHGs.  However, these same states have not demonstrated their recognition of, nor made sufficient and rapid enough commitments to, the necessary steps that are required to tackle this crisis situation. This can only be achieved when these wealthy and powerful states seriously commit to the act of significantly reducing their own consumption of natural resources, as well as drastically cutting their emissions of GHGs.
People around the world are no longer waiting for these powerful nations to come up with intergovernmental agreements- but have been taking action locally, committing our selves to slowing the destructive process of global warming. We, a group of individuals who are concerned about the global climate crisis as well as the worsening environmental situation in this region, together with other groups and friends in Chiang Mai, have been active in raising more awareness among people in Chiang Mai and the world. The local action carried out last year during the Copenhagen Climate Conference was one of them.
( http://www.youtube.com/watch?v=kk90t7Oj9CM&feature=email )
We expect and request the consulate, as a representative of its government, to show its commitment in taking responsibility for this situation, which will also contribute to a healthier environment here in Chiang Mai. We are also here to express our contention that all personnel working at the consulate, seen as representatives of our respective countries as well as highly influential individuals living in Chiang Mai, to join us and contribute to lessening the effects of global warming and the environmental degradation currently occurring in our city.
We would like to introduce the commitments made by other organizations and individuals including the Ministry of Energy, Chiang Mai’s Mayor, a number of area schools including faculties and students, etc. through the “People’s Pledge”. The “People’s Pledge” is conceived based on the concept of the campaign- 10:10.  10:10 inspires and supports people and organizations to cut their carbon emissions by 10% per year. Any individual, family, business or organization can make the commitment. 10:10 was initially launched as a UK campaign on the 1st of September 2009. Since then, the campaign has expanded and currently 113,031have been signed up in 186 countries. (for more information: http://www.1010global.org/ ) One of the 10:10 global campaigners, Lizzie Gillett congratulates Chiang Mai as the 1st Green Eco City in South East Asia:
http://www.youtube.com/holisticearth1
We also would like to ask each and every member of the personnel of the consulate to sign on to the “People’s Pledge” and to pro-actively implement it in her/his daily life.
We believe the consulate has an even greater responsibility and capacity than to just implement the “People’s Pledge” and so propose adding the following actions to the “people’s Pledge” to be adopted by the consulate as the “Chiang Mai Consulate Pledge”.
These actions include:
We also expect the consulates to act in the role of a ‘model’- as institutions in Chiang Mai, in contributing to a healthier environment and a more sustainable level of development through increasing their accountability and promoting cooperation with civil society.
We look forward to meeting you and discussing our proposal further on 15 December, 2011.
Alex Putnam
Caroline Marsh-Subkaew
Dave Arthurs
Oliver Hargreave
Punika Shinawatra
Russell Kirk Hollis
Steve Green
Tomoko Kashiwazaki
members of Lanna Community Life Network (LCLN)

Posted by HolisticEarth01 at 12:29 AM No comments: 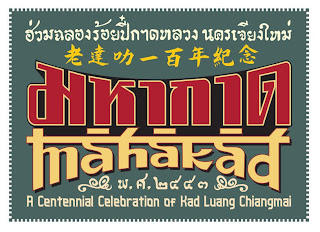 To mark the 100 year anniverary celebrations of Chiang Mai’s historical Warorot Market, known locally as Kad Luang. Internationally acclaimed Thai artist and Chiang Mai native, Navin Rawanchaikul has initiated a first of its kind community‐based arts festival namely the “Mahākād”. In collaboration with various guest artists and community groups, reflected in its multi‐cultural title that references the ancient Indian epic, Mahābhārata, this festival aims to promote awareness of the local identities and their unique cultures. Incorporating newly conceived artworks by Navin Production Studio and an associated exhibition presenting a faithfully preserved and documented history of Chiang Mai’s past. In reflection a contemporary photographer will create a visual dialogue between the senior photographers and insights collected from youth workshops with local government schools a universities.

Festival Dates: December 25, 2010 – February 6th 2011 (daily 9am – 6pm, free admission)
Locations:
Kad Luang market place within walking distance to the surrounding neighborhood (detailed map of all project sites will be provided)
Mahākād Festival Information Centre at Luang Anusarnsunthorn Residence (The WhiteBuilding), at the eastside junction of Narawat Bridge opposite Buddhastan (Buddhist Association) on Thapae Road. Here you can pick up walking tour map of all the exhibition venues. (closed Mondays)

For Festival information, general inquiries please contact;
http://www.navinproduction.com/
comments: ...Thank-you again http://www.trekkingcollective.com/ with my friend Sophie and my daugther Manon we also enjoyed visiting the Mahakad Festival. Thank you for giving us the informations... It was really interesting to explore this market. Susanne dr.smeier@bluewin.ch

Posted by HolisticEarth01 at 6:42 PM No comments: