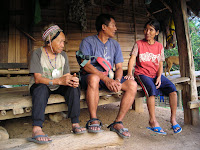 Caroline Marsh is co-founder of Chiang Mai based independent ethical tour operator http://www.trekkingcollective.com/ .."Expertise, Ethical travel and Authentic Experiences contribute to making a difference to local communities and the environment." passionate about new experiences, travel and environmental well being she writes for travel sites and coordinates local 'grassroots' community peoples actions for a better future for all.
Posted by HolisticEarth01 at 11:40 PM