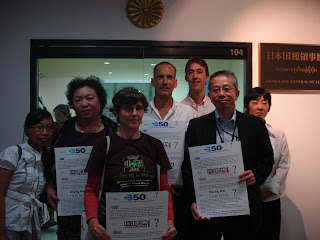 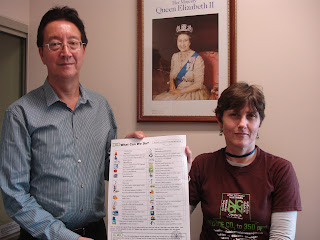 
On the issues regarding the highly critical situation of the global climate crisis. An issue that undeniably requires urgent action globally, as well as locally, here in Chiang Mai.
Lanna Community Life Network (LCLN) People’s Action December 2010
A  group of Chiang Mai citizens under the banner of Lanna Community Life Network (LCLN) visited US, UK and Japanese Consulates to begin a dialogue with high-level consulate personnel
Firstly the group expressed its concerns about the slow process of negotiations between states- as well as the insufficient commitment made by all states in addressing the causes and consequences of climate change. It has been recognized that major industrialized countries, such as the US, Japan and the UK are responsible for the majority of global natural resource depletion and subsequently are the biggest emitters of GHGs.  However, these same states have not demonstrated their recognition of, nor made sufficient and rapid enough commitments to, the necessary steps that are required to tackle this crisis situation. This can only be achieved when these wealthy and powerful states seriously commit to the act of significantly reducing their own consumption of natural resources, as well as drastically cutting their emissions of GHGs.
As a way to respond to this situation, the group introduced and proposed the “People’s Pledge” and the “Chiang Mai Consulate Pledge” to the consulates.
The “People’s Pledge” is a commitment which individuals, families, businesses or organizations make in order to reduce GHG emissions and protect the environment by taking various actions. This is based on the concept of the campaign- 10:10, which inspires and supports people and organizations to cut their carbon emissions by 10% per year. 10:10 was initially launched as a UK campaign on September 1st 2009. Since then, the campaign has expanded and currently 113,031 have signed up in 186 countries. LCLN adapted a set of actions to reduce GHG emissions, which are specifically relevant to Chiang Mai. And these actions include a ‘Zero Burning’ campaign (forest, agricultural and residential) and the restoration of the ancient community ‘kud’ laws introduced 715 years ago during the reign of King Mengrai, whom established Chiang Mai and the eight provinces making up the Lanna kingdom. These laws governed wisely the city’s natural resources. The “People’s Pledge” has been signed by organisations and individuals in Chiang Mai including the Governor, Chao Duong Duen Na Chiang Mai, Ministry of Energy, Chiang Mai’s Mayor, Ministry of Environment and Natural Resources, Ministry of Health, a number of schools including faculties, students and parents  are leading the way with nearly 10,000 signatures pledged to date.
The group also proposed adding more actions to the “People’s Pledge” to be adopted by the consulate as the “Chiang Mai Consulate Pledge” complying with a given consulate’s greater capacity and responsibility to the community where it is located, and as a pro-active representative of its respective government.
The “Chiang Mai Consulate Pledge” includes:
§  Ensuring all consulate sponsored programs, projects and activities will be ecologically responsible;
§  Conducting carbon audits of all consulate activities and publish the results regularly;
§  Proposing and promoting the low-carbon development model at all consulate-sponsored events;
§  Providing any available financial support, as well as any other potential forms of support, to the civil society in Chiang Mai in order to increase awareness on environmentally sound and sustainable development.
The group was welcomed with Japanese green tea by the Consul of Japan, Masahide Sato. Asked about the policy and measures of the consulate office to tackle climate change, he shared their initiative- “cool-biz” as part of their attempt to save energy, a working-style implemented in his office, which includes wearing no neck-tie for men and setting the temperature of the air conditioning at a maximum of 25 degrees C. He also shared with us that more than 3,000 Japanese people reside in Chiang Mai and are registered at the consulate, of which 1,500 are retired. And that many of whom routinely go home during the worst of the air pollution season in Chiang Mai – from late January to April. Mr. Sato further stated that due to the limited human and financial capacity of the consulate, he could not at this time agree to prioritise the environmental issues raised by LCLN among the other important issues the consulate must undertake. And he therefore could not commit the Japanese Consulate to the signing of the “Pledge”.  However he promised that he would share the concept of the “Pledge” and its list of actions, with his colleagues. He added that the visits to his office by civil society groups are always welcome.

Honorary Consul of UK Ben Svasti Thomson welcomed the group and entered into a discussion on environmental issues in Chiang Mai and the initiatives taken by the UK government. He informed LCLN of new legislation to regulate corporations in the UK, which is part of the effort to tackle the effect of business activities on the environment and lessen the impacts of global warming. UK embassies and consulates are also implementing measures to cut 10% of their emissions annually as part of the UK Government policy.  “Climate Control” was an issue that Mr. Thomson took great interest in and was well aware of the need for action at both a local and global level.
On signing the “Chiang Mai Consulate Pledge” he commits the UK Consulate to setting air conditioners to 25c., supporting local farmers and buying local organic produce, support zero burning, supporting green and ethical businesses; initiatives to protect the Mae Kha Canal and the Ping River and methods to save water, reusing glass bottles, recycling and composting organic waste; walk instead of using the car. A proposed carbon audit by the group was welcomed and it is in the process of being submitted to the consulate.
LCLN members made an appointment with the U.S. Consulate and were met by Consular / Economic Officer Thomas Schmidt. Our engagement was brief and held while standing in the public waiting area of the consulate facility. We expressed our concerns and objectives and presented our People’s Pledge. We were informed that U.S. Consulate official policy prevented Mr. Schmidt from making any comment or commitment. We were assured that the purpose of our visit would be noted for consideration, but that no official response may be given.
U.S. Consulate policy prevents visitors from taking of any photographs within the consulate facility.
Written by
Tomoko Kashiwazaki
With additional content by Kirk Hollis, Alex Putnam, Caroline Marsh
Lanna Community Life Network (LCLN) People’s Action December 2010
http://www.facebook.com/pages/Lanna-Community-life-Network-Chiang-Mai-Thailand/143518985705533 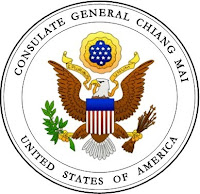